Crag Hack, in Heroes of Might and Magic Online.

This article is about a Barbarian of the Ancient universe. For his Ashan counterpart, see Crag Hack (Ashan). For other characters sharing his name, see Crag Hack.

Renowned for his desire for gold, wine and women, few of Crag Hack's myriad adventures are actually portrayed in the games.[3] Crag's birthplace is uncertain, because although he is implied to have rarely if ever visited Antagarich before Heroes III,[4] he did have relatives in Erathia.[2]

Crag Hack participated in both of the Wars of Enrothian Succession, fighting on the side of Lord Slayer from the Frozen Highlands. 25 years later, when the tribes of Krashaw were subjugated by Archibald Ironfist, Crag aided Archibald in the war, becoming a decorated hero. Following Archibald's defeat in 1154 AS, Crag became bored with peacetime and chose to travel to Antagarich, where his skills and taste for adventure could be better served.[4]

A decorated hero in Enroth, Crag Hack became bored with his home, deciding to seek out a new life in Erathia. He boldly set sail for this new frontier, and was delighted to find a land in turmoil where his skills could be best put to use.OffBck

Upon his arrival on the continent, Crag headed for the wastes of Avauntnell, where - after a barfight with some goblins in the Wingtail Tavern - he was approached by a spellcaster, Sandro, who requested that he embark on a journey across western Antagarich to locate and destroy the components of the Armor of the Damned, a destructive necromantic artifact. In exchange, Sandro offered Crag an extensive land grant and lavish monetary rewards. Eager to destroy anything necromantic, Crag quickly accepted the quest.[5]

Crag Hack will forever remain an opportunist, fighting for pleasure and profit instead of foolish intangibles like ideals or beliefs. Even his narrow escape from the destruction of the old world has failed to give him a more profound outlook on life.OffBck

Crag Hack is a Barbarian. He starts with advanced Offense.

Crag Hack,s in Heroes I 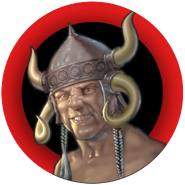 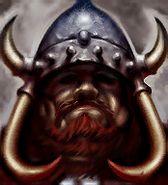 Crag and Yog portrait in Heroes III: The Shadow of Death

Crag Hack as he appears in HoMM Online

Crag Hack, in Heroes of Might and Magic for Game Boy Color