For other characters of the same name, see Ciele.

Ciele is unmistakably an Elf, but she wasn't born in the shadows of the great trees of Irollan. Ciele was raised on the sea, upon one of the house-ships of her nomadic kindred, the Sea Elves, who worship both Sylanna (for her gifts) and Shalassa (for her hospitality). A long time ago these Elves belonged to the Shantiri Empire, but now they are gypsies of the ocean, wandering the seas of Ashan on makeshift vessels hewn from trees and wrought into boats. Each Sea Elf belongs to a particular clan, called the "crew", to which he or she remains fiercely loyal. Ciele is the last of her own crew, sundered and destroyed when a tidal wave wrecked their house-ship. She was saved by the Nagas, and now considers them her new family.OffBck

Ciele can be found in Fort (14, 29) in The Crag, tending to Crag Hack. Rumor has it she has a special magical connection to water which makes her ship the fastest in the pirate fleet.

Ciele is a Might member of the Sanctuary faction. As such, her default class is Samurai. While her Dynasty character is listed as a Shogun, she may be developed however the player chooses when used in a game.

She can train your party members in master level of Water Magic for 1500 Gold. She is a talented healer, but Crag`s ailment will require the help of some adventurous raiders.

Ciele is a Ranger.

Ciele's inclusion as a backstory character in Ashan is heralded by Might & Magic: Heroes VI, presumably as part of celebratory references to commemorate the 25th anniversary of the Might and Magic series. Ciele's addition is made in reference to the Ciele of Heroes III. 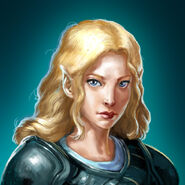 Ciele in Heroes VI
Add a photo to this gallery
Retrieved from "https://mightandmagic.fandom.com/wiki/Ciele_(Ashan)?oldid=132887"
Community content is available under CC-BY-SA unless otherwise noted.