For other characters of the same name, see Christian.

"If you were to ask me where my loyalties lie, in all honesty, I would answer, "To whomever could get me home.""
—Christian

Sir Christian is a recurring hero in the Heroes of Might and Magic series, and the protagonist of the Heroes of Might and Magic III: Armageddon's Blade bonus campaign, Foolhardy Waywardness. A pseudo-comic relief character, Christian aspired to a career as a Fragrance Alchemist in his homeland of Enroth, but continuously found himself stranded upon dangerous and infuriating island-nations. His attempts to flee these perilous situations shaped him from a "sissy-boy" into a world-renowned Knight in the service of Erathia and, later, Palaedra.

Christian was always more of a frontiersman than a Knight, having set foot in nearly every part of Enroth before finally settling into military service in Erathia. Though a wanderer and a bit of a dreamer, his battlefield tactics are feared throughout the world.OffBck

Sir Christian is a notorious sissy boy. His father has all but given up on his son becoming a great and powerful warlord.OffBck

During Erathia's restoration and the ensuing wars, Christian proved himself to be a loyal and valuable member of the military. He is a committed and organized commander who provides his service and adventurous spirit to any and all worthy causes.OffBck

Christian is a Knight. He starts with basic Leadership and Artillery.

Christian is a Knight.

Christian, in the Foolhardy Waywardness campaign 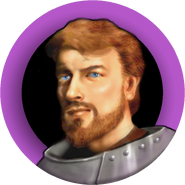