For other characters of the same name, see Charna.

Alive (as of Heroes IV)
Charna is a female human Death Knight seen in Heroes III and IV.

Charna was seduced by the temptation of the powers of darkness. Though her magical abilities will never allow her to be a true necromancer, she is a more than effective warrior.OffBck

Charna was born with a dark heart. She has never felt compassion for another creature, and love is a myth as far as she is concerned. So, free of a conscience, she has been able to do things that even some demons balk at. When no one else will do the job, Charna is your woman.OffBck

Charna is a Death Knight, and starts with basic Necromancy and Tactics.

Charna is a death knight. 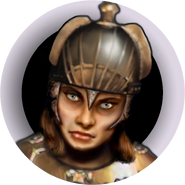