This article is about the creature from Heroes VI. For other uses, see chakram dancer.

The chakram dancer is a creature in the Shades of Darkness expansion of Might & Magic: Heroes VI. A Core creature of the Dungeon faction, it is the upgraded version of the stalker.

For the Chakram Dancer, her Chakram is like an extension of her hand, responding perfectly to her will, made even more lethal by the crippling curse that enchants its blades.OffBck

The chakram dancer's attacks reduce the movement of their targets, making them ideal for use against fast opponents. While their Whirling Death ability is potentially dangerous due to its propensity for hitting allies as well as enemies, when positioned at the top corner of the field with the Tactics ability and with allies kept from getting too close to its path, Whirling Death can be used to great effect early to thin the ranks of enemies, particularly larger enemies, which are bigger and therefore easier to hit with the curved arc of the ability. Whirling Death may also be used to bypass ranged damage reduction from cover or from abilities, greatly increasing their effectivity when sieging castles and against enemies like praetorians. When using Whirling Death, keep in mind that larger enemies may be attacked in any of the four squares that they take up, increasing the options for the arc of the chakram dancer's throws.

The chakram dancer shines in battles with other armies, be it a siege or in the field. With their decent initiative, possibly increased through the Ambush ability, their Whirling Death may be used early to devastate the enemy lines, often tightly clustered at the beginning of combat. This already impressive damage may be increased further with support abilities such as Burning Determination.

When fighting chakram dancers, efforts should immediately be made to stop them from attacking, as their Whirling Death is incredibly dangerous against a full army. Stunning or turn-skipping abilities can buy the time melee units need to reach the chakram dancers, or ranged units may focus their attacks on the chakram dancer to render them incapable of doing much damage against the army. They remain a large priority even when they are fought as a part of a full party of Dungeon creatures, as an early, powerful Whirling Death strike can instantly put an army on the defensive. 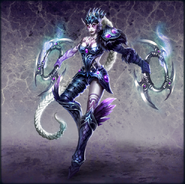 Artwork of the chakram dancer. 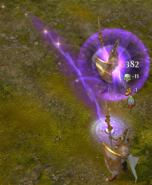 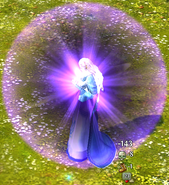 Curse of Shadow taking effect on a sister.
Community content is available under CC-BY-SA unless otherwise noted.
Advertisement