1175 AS
Catherine Ironfist (née Gryphonheart) was the wife of King Roland Ironfist and daughter of King Nicolas Gryphonheart, whom she succeeded as the Queen of Erathia. She restored the Kingdom of Erathia from the brink of collapse after it was invaded by multiple sides following her father's death, and later played an instrumental role in the war for Armageddon's Blade.

The protagonist of Heroes of Might and Magic III: The Restoration of Erathia, she is voiced in all of her appearances by Wendee Lee.

Catherine Ironfist on her throne 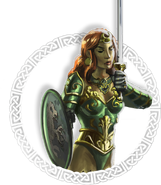 Artwork of Catherine, made by Ubisoft
Polski Русский
Community content is available under CC-BY-SA unless otherwise noted.
Advertisement