Castle Gryphonheart, also known as The Palace, was the family residence of the Gryphonheart dynasty, located in Steadwick, the capitol of Erathia situated in the Battlestead region. It appeared in Heroes of Might and Magic III: The Restoration of Erathia, and in Might and Magic VII: For Blood and Honor as an explorable dungeon.

Castle Gryphonheart plays a small role in Heroes III, as both the locale where Nicolas Gryphonheart was murdered and as the setting for The Legacy - a prerelease short story featuring Xanthor and the REMC.[1] It appears alongside Steadwick in the Steadwick's Fall and Steadwick's Liberation scenarios as a standard Castle building preset in Steadwick, though is not directly named.[2][3]

Castle Gryphonheart is an explorable dungeon in Might and Magic VII, located upon a hill just east of the city of Steadwick. Its randomly-generated treasure is of low-to-medium quality, and the dungeon respawns at least once per game year. An APV of 12 is required to access secret and hidden rooms, while the dungeon's Base Stealing Value is set at 10.

Two NPCs are present in Castle Gryphonheart: Catherine Ironfist and Alice Hargreaves. Catherine can be located in the Throne Room emblazoned with Enrothian banners. She is the questgiver for Rescue Loren Steel and Deliver False Riverstride Plans, and acts as the destination for Deliver the Loren Imposter. During Retrieve Gryphonheart's Trumpet, players can also give Catherine the trumpet, cementing Harmondale's alliance with Erathia. Catherine cannot be visited until after Ellen Rockway's invitation is issued, once Castle Harmondale is restored.

Alice Hargreaves is located in a locked room in the southern wing of the Castle. If the player has chosen the Path of Darkness and visited William Setag in Deyja, they can choose to Capture Alice Hargreaves and return to Setag to complete the Villain promotion quest. The Archibald Ironfist painting and Roland Ironfist painting are also located here, required to complete the Retrieve the three paintings quest for Ferdinand Visconti in Tatalia.

The Castle is defended only by several standard Erathian guards: Archers, Soldiers and Champions of the Sword. The guards are not initially hostile to the player, but can easily become so; venturing beyond the patrols near Queen Catherine's throne room or openly betraying Erathia during the AvLee-Erathia border conflict will trigger hostility. 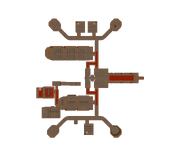 The throne room
Add a photo to this gallery

Retrieved from "https://mightandmagic.fandom.com/wiki/Castle_Gryphonheart?oldid=145818"
Community content is available under CC-BY-SA unless otherwise noted.