This article is about the creature from Heroes VI. For other uses, see black dragon.

The black dragon is a creature in the Shades of Darkness expansion of Might & Magic: Heroes VI. It is the upgraded version of the shadow dragon.

The legendary Black Dragons are the ultimate evolution of the Shadow Dragons. On their wings, the eyes of Malassa are replaced by intricate patterns of light constantly dissolving, like galaxies being swallowed by the eternal darkness of space.OffBck

The black dragon is fast, powerful, and effective. Black dragons are impervious to magic attacks from enemy heroes, and nearly impervious to magic attacks from enemies, considering its high magic defense. The black dragon is also powerful offensively, and when they fight in numbers, their Withering Breath ability can be devastating. Furthermore, their Terrifying Presence helps to stop nearby enemy troops from acting, either directly or by lowering their morale and increasing the chance of a bad morale check.

Black dragons are powerful offensive forces when besieging an enemy town, able to fly behind lines and potentially stun adjacent enemies. When being besieged, the black dragon may potentially wait, fly out from behind the walls and attack the enemy, and then fly back behind the walls, sparing them from focused attack by the enemy.

When fighting black dragons, shooters that deal Might damage are the key to damaging them safely. Should that not be enough, attack with your most powerful might units, or units that may strike and return to avoid the Terrifying Presence of the black dragons.

Artwork of the black dragon. 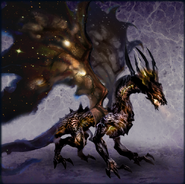 Artwork as it appears in-game. 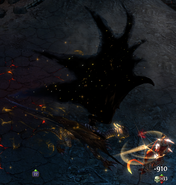 The attack of the black dragon. 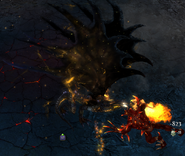 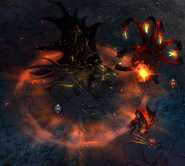 A lilim affected by the black dragon's Terrifying Presence.
Русский
Community content is available under CC-BY-SA unless otherwise noted.