Bart Brimstone is a character in Pirates of the Savage Sea, Might & Magic X: Legacy and Might & Magic: Heroes VII add-on, Trial by Fire.

Pirates of the Savage SeaEdit

Bart Brimstone is a pirate and Crag Hack's former quartermaster. He lives on the Savage Islands, and works as an armorsmith.

Bart Brimstone is a captain from Grimheim, he is at the Toothrot Tavern (18,10) in The Crag.

Born in a clan of artisans and engineers, Bart Brimstone was fascinated by water and believed there was great power to be harnessed in the marriage of fire and its opposite element. His research was regarded as heresy by the other Dwarves, which eventually led to Brimstone’s exile. To further his knowledge of water in all its forms, he eventually joined a crew of Sea Elves in their travels, and ended up falling in love with the ocean and its endless possibilities. He became a pirate to fund his experiments, and created the Fiery Heart, Ashan’s first (and only) steam-powered warship.OffBck

Pirates of the Savage SeaEdit

He offers his services for 75 Gold and 9% share of the gold, in return he will offer to repair items whenever required to.

He teaches master Dodging for 1500 gold.

Bart is a Runelord.

Bart Brimstone, in Pirates of the Savage Sea 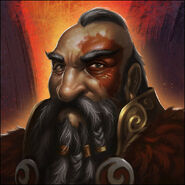 Bart Brimstone, prerelease portrait in Heroes VII
Add a photo to this gallery
Retrieved from "https://mightandmagic.fandom.com/wiki/Bart_Brimstone?oldid=145538"
Community content is available under CC-BY-SA unless otherwise noted.