For other uses, see barbarian.

The Barbarian is an orc character class in Might & Magic X: Legacy.

“The Barbarian fights without armor not to be handicapped when he unleashes brutal strikes on his foe. With two weapons or with a two-handed weapon, he doesn't care.”

The Barbarian deals the most melee damage with melee weapons, and favours using two-handed weapons or two weapons at once. Therefore he prefers the mace or axe. But his life is rather low, he is not particularly good at evading, and to make things even worse, he has no idea of how to use a shield. Anyway, he’s capable of redirecting damage.

Light armor is his first choice, and he once heard how to use a bow.

The advanced class of the Barbarian.

The Warmonger receives the ability “Blood Rage”: The Warmonger deals more damage that is increasing when Health decreasing. 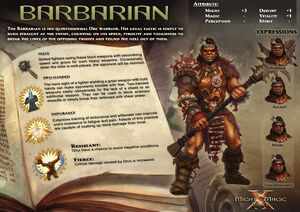 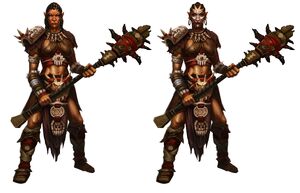 Add a photo to this gallery
Retrieved from "https://mightandmagic.fandom.com/wiki/Barbarian_(MM10)?oldid=132335"
Community content is available under CC-BY-SA unless otherwise noted.