Dead (as of Clash of Heroes)

Azexes is a character in Might & Magic: Clash of Heroes.

In his younger days, Azexes was a demon who caused trouble on Ashan, along with Jezebeth as his partner, though Jezebeth was not much impressed by his progress.

Years later, Azexes has been sent to retrieve the Blade of Binding, per Lord Bloodcrown's orders. He killed many people during the meeting in Irollan, but did not find the Blade. Lord Bloodcrown was enraged and sent him to get it once more, but was defeated by Anwen. Still, he used a portal to flee the battle.

He went again to get the blade, using Lord Bloodcrown's portals to search once more. Eventually, Aidan, who was seeking revenge for his father, managed to find Azexes and kill him.

Anwen has to defeat Azexes to free Godric from chains.

Azexes has 150 points. He can conjure up energy balls - a big one requires five turns, while two smaller ones three turns.

To end his vengeance, Aidan has to slay Azexes. He has 200 Hit Points. Like before, he can conjure the energy balls, but can also summon walls and making them explode.

Azexes appears only in Might & Magic: Clash of Heroes. 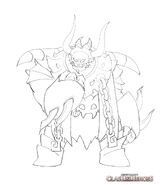 Azexes kills Delara
Add a photo to this gallery
Retrieved from "https://mightandmagic.fandom.com/wiki/Azexes?oldid=150470"
Community content is available under CC-BY-SA unless otherwise noted.