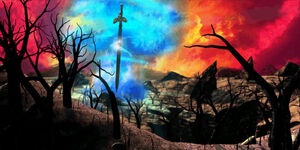 Queen Catherine, her husband King Roland and Gelu, a warrior in Erathia's elite Forestguard, must work together to defeat the insane King Lucifer of Eeofol who will create Armageddon's Blade. With it he plans to set the world on fire.OffBck

Lucifer Kreegan, King of Eeofol, decides to forge Armageddon's Blade, and use the power of this artifact to destroy the world. Queen Catherine of Erathia, her husband King Roland Ironfist of Enroth, and Gelu of the Forest Guard, band together to defeat him.

Like most Armageddon's Blade campaigns, this campaign has a cut-out theme version.