Dead (as of Dark Messiah)

"There's power to be found in books, if you first learn humility. I surrendered to Asha. Her will is my own. And her plans for Heresh don't involve the petty and faithless."
—Arantir, to Giovanni [src]

High Lord Arantir is a scholar, Necromancer, and ruler of Heresh, and the primary antagonist of Dark Messiah of Might and Magic. An unconventional death mage, he claims to be the chief servant of the Spider of Asha, and seeks only to combat Urgash and his demonic children, with a willingness to cooperate with other factions when the need arises.

The lords of Heresh are a cold, grim, and fanatic group. To climb high in their ranks requires not only talent, but also relentless dedication to the cause of their god, the spider-aspect of Asha. Arantir has risen high indeed, and counts as one of the greatest ever to live - or unlive - among them. Intense in his beliefs and dedicated to the worship of his goddess and the destruction of her demonic enemies, Arantir is a formidable leader.OffBck

A fervent disciple of Asha, Arantir claims he is several centuries old, though was not memorably active until the later events of Queen Isabel's War. A scholar of demonic lore, he emerged following the death of Necrolord Markal, and proceeded to conquer over half of the territories of Heresh, challenging and destroying four of his fellow Necromancers. Quickly asserting himself as a fiercely competent tactician as well as an accomplished spellcaster, he soon caught the attention of Lord Giovanni, an ambitious rival Necrolord with dreams of grandeur.

Posing as a loyal vassal, Giovanni had his apprentice Ornella slay Lord Malfroy and take the northwestern city of Iluma Nadin as a gift to Arantir. When Arantir arrived to claim it, Giovanni presented him Ornella as well, requesting that he transform her into a Vampire through the Kiss of the Spider Goddess. Agreeing, Arantir teleported the three to Asha's Web and performed the ritual. As he completed the process, Giovanni, seizing his chance, rushed toward Arantir and attacked him from behind. However, Arantir retorted with a spell, killing Giovanni as Ornella watched. She was quick to swear fealty to Arantir, and he had her sent to Nar-Ankar to "purge her spirit further in the crucible of the Goddess".

Learning of Demon cultists in the Silver Cities, Arantir journeyed with Ornella to the northwest. There, capturing the Wizard cultists' headquarters, he interrogated one of their members, who told him of Orlando - the hierophant of the cult of Urgash - and sought the wisdom of a Blind Brother, who spoke of the prophecies of the Demon Messiah and events yet to occur. Paying this knowledge little heed, Arantir pressed on to the lands of the Bull Duchy, where Giovanni had already prepared his own assault on Orlando's forces. He met Kujin and she recognized him as one of her omens. They made an alliance and proceeded with their tasks. Arantir assaulted the Griffin Empire and killed Orlando in the holy city of Flammschrein, but had to sacrifice four of his most powerful acolytes, including Ornella, in order to lift the magic barrier protecting the city. Inside the cathedral of the Red Church, he found the imprisoned spirit of Isabel Greyhound. Having learned that the Demon Messiah was already born from her, he sent the Empress's soul back to her body and began his travels in the search for the Skull of Shadows, in order to prevent the Demon Messiah from using it to break the walls of Sheogh. 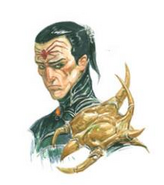 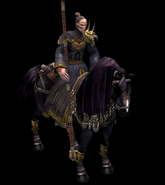 Arantir as he appears in Dark Messiah

Arantir among fellow characters in the Might and Magic 25th anniversary artwork
Add a photo to this gallery
Retrieved from "https://mightandmagic.fandom.com/wiki/Arantir?oldid=147842"
Community content is available under CC-BY-SA unless otherwise noted.