Captain of the Guard (formerly)

Alive (as of Shifters)

"And thus, the written word of prophecy became reality, and a man became a god."
—Saylo, after Alleron defeated Daglathor and Daria

Alleron is the main character of Warriors of Might and Magic and Shifters.

Forced to wear a painful mask as testament to a crime he did not commit, Alleron, a warrior of great renown, must prove his innocence and fight through lands most perilous to discover and vanquish his ultimate rival.OffBck

Alleron is a former Captain of the Guard, but was falsely accused of practicing necromancy. The Inquisitor placed the Mask of the Accused on his face, and Alleron was thrown into the Pit of the Accused.

Alleron in the PS1 version

Alleron in the PS2 version 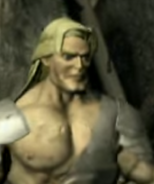 Alleron without the mask
Add a photo to this gallery
Retrieved from "https://mightandmagic.fandom.com/wiki/Alleron?oldid=148802"
Community content is available under CC-BY-SA unless otherwise noted.