Airini is the Shaman of a minor Orc tribe from the Pao Islands, in the Jade Ocean, but she swears no oath of loyalty to Sharka, believing him accomplice to a cartel of human slavers who took all her brothers to work in the dangerous mines of Kadiss Crevice when she was still a child.
Smart and physically courageous, Airini is suspicious of everyone she meets - especially babyteeth who see the world in too many shades of gray.OffBck

Airini comes from little archipelago north of Pao Islands. Airini can be found in the Healing Lodge in The Crag. She is an orc.

Airini is an Earth Shaper.

She grants the quest (Quest 45) for Shaman party members to advance to the Blood Caller class. 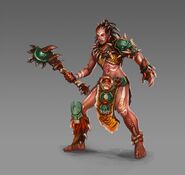 Airini's concept art
Add a photo to this gallery
Retrieved from "https://mightandmagic.fandom.com/wiki/Airini?oldid=154009"
Community content is available under CC-BY-SA unless otherwise noted.