For other characters of the same name, see Aidan.

Aidan, as a normal human, and with his hand infused with the Blade of Binding.

"Don't worry about that, Jezebeth. I feel fine. Better than fine, I feel... Powerful!"
—Aidan to Jezebeth about the Blade of Binding [src]

Aidan Unicorn is a character in Might & Magic: Clash of Heroes.

He is the youngest son of Edric Unicorn and younger brother of Godric and Fiona Unicorn. During the prologue, when the demons attack the forest of Irollan, he grabs a dagger from a lifeless Lasir and runs from Azexes. When everyone goes into the portal and gets teleported to different places of the world, Aidan gets teleported to Sheogh.

In Sheogh, he commanded demons, which is quite unusual. He teams up with Jezebeth and goes to defeat Azexes. However, the dagger he picked up in Irollan fused with his arm and when he approached Azexes, his master, Lord Bloodcrown, told him to get the Blade of Binding so he can command the demons to his own will. Aidan and Jezebeth realized the dagger was the Blade of Binding. Still, Aidan kills Azexes and has his revenge.

Later, at Azh Rafir's command, he was summoned and was controlled to battle Godric. Godric defeated him and Aidan, regained his control, attacked Azh Rafir. When Nadia defeated Lord Bloodcrown, a year later, he became a Dragon Knight, battled demons and was never seen or heard again.

Aidan, along with his siblings visited the camp in Irollan. Aidan seemed disintrested and irritated at the forest and claimed it to be nothing but a hassle. After Godric and Anwen went to meet their guests from the Silver Cities, the camp they were residing at was attacked by demons. Aidan witnessed Fiona being injured by a demon shooting her in the back . Out of fear, he grabbed a nearby dagger from the body of Lasir, and crawled away from where the fallen parents had tried in vain to save him and the other children. Godric and Anwen returned with Lady Delara and Nadia and witnessed the fate of the camp. Aidan, with the others, ran for the portal to the Silver Cities to make their escape.

But the portal, being opened for an extended period of time, became unstable and scattered Aidan and the others across the land.

Aidan found himself alone in the demon realm of Sheogh and needed at first only a way to escape. Aidan didn't know that he had grabbed the Blade of Binding, but found out he could control demons, including the succubus named Jezebeth. He changed his goal and went after Azexes to exact his revenge for the death of his Father. Aidan became corrupted by the Blade's power, with the Blade merging with his arm.

Aidan in having the Blade of Binding was teleported to the Silver Cities by Azh Rafir, who was not expecting Aidan but Azexes. Because of the Blood Moon being in full rise, Azh Rafir had a grip over Aidan's mind. Godric had to defeat him. When he does, Aidan turns his anger at Azh Rafir and attacks him.

Aidan, along with his siblings, receives praise from emperor and his son. Later, Aidan becomes a Dragon Knight.

Aidan with Jezebeth and most of the Inferno units.

Aidan in the launch trailer 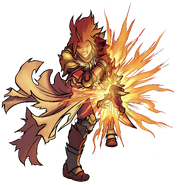 Add a photo to this gallery
Retrieved from "https://mightandmagic.fandom.com/wiki/Aidan_(CoH)?oldid=150466"
Community content is available under CC-BY-SA unless otherwise noted.