For the hero in Heroes VI, see Adelaide (Ashan).

Alive (as of Heroes IV)
Adelaide is a hero in Heroes III and Heroes IV.

Caught at sea during a storm, Adelaide was shipwrecked on the shores of Vori, home of the Snow Elves. She trained with them for some twenty years, and upon her return to Erathia discovered that no time had passed in her absence.OffBck

Adelaide's love for the snowy landscapes of her homeland seems like a contradiction to the warmth of her personality. All who know her quickly become her friend, and all who come to her for advice know that she will give them her honest opinion.OffBck

Adelaide is a Cleric. She starts with advanced Wisdom.

Adelaide is a Priest. 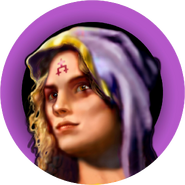