For the faction in other games, see Academy.

Silver Cities
The Academy is a faction in Might & Magic: Heroes VII. It is made up of magicians, who dedicate their lives to magic and magical items.

Wizards are proud seekers of knowledge, and subjugators of the natural order. They prize knowledge and research above all, and their great weakness is their desire to seek for these things in places - and in ways - that might be best left unexplored. Intellectually competitive, sybaritic, and Machiavellian, others often find them arrogant and supercilious.OffBck

Most wizards feared the necromancers of House Eterna, so they started banishing anyone practising necromancy. The necromancers made a rebellion and fled to Heresh, since then the Seven Cities became known as the Silver Cities. 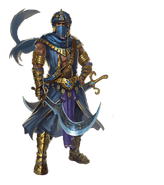